We have the best musicians and stunning concert venues. Let’s make sure we use them to tell the most meaningful stories.

While travelling in the Middle East, I saw many children full of musical talent trying to find a way to tell their story to the world in a creative way. We made a short video of a rap made by Aya, a brave young refugee in Jordan. This song was reworked by school children in the Netherlands and the United States into a composition for a classical ensemble and it was performed in places like the Lincoln Centre in New York.

We sent the recording back to Aya, which encouraged her to send her own story and that of her friends out into the world. We also started working in Lebanon, in asylum seekers’ centres all over Europe and in a children’s prison in Malawi.

We call it Musical Postcards: a short song or melody from a child that talks about the world as they experience it at the moment and their dream for 2030. Then in the composition workshops at schools, teenagers familiarise themselves with the issues and contact the composer of the Postcard directly. After that, musicians play these compositions in their normal concerts and give regular audience members access to the most meaningful stories of today.

Are you a musician and would you perform a postcard at your concert? Contact anke@twaalfhoven.net

What we can work on together 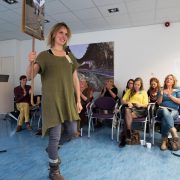